By Steven A. Rosenberg

For almost three decades, a dusty half-acre vacant lot greeted visitors when they entered downtown Lynn from the Lynnway. These days, city officials hope that All Care Visiting Nurse Association and Hospice’s $9 million, four-story brick and glass building that stands on the spot will herald a new era of investment in Lynn’s downtown.

“It’s great for both the city and its partner, the VNA,’’ said state Representative Steven M. Walsh, a Lynn Democrat who represents the downtown area.

“We have a beautiful building at the gateway that hopefully is going to be a harbinger of more development to come.’’ 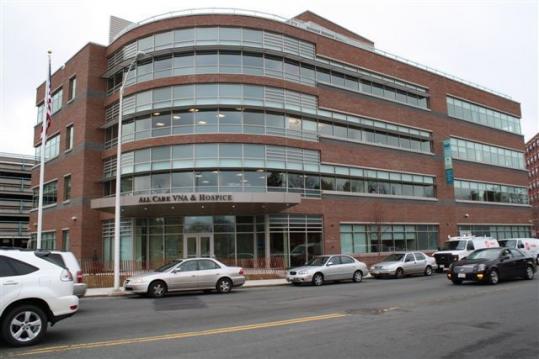 On March 8, city officials and All Care employees will officially mark the new building with a ribbon-cutting.

But for All Care, one of the state’s largest visiting nurse organizations, the building represents a new chapter in its history, which began more than 100 years ago in Lynn.

“We really wanted to remain in Lynn,’’ explained Shawn Potter, All Care’s president and chief executive officer. Potter said almost half of the nonprofit’s 630 employees live in Lynn, and they serve about 12,000 people a year – including about 6,000 Lynn residents.

All Care, which provides visiting nurses, hospice, and private home care, serves patients in communities north of Boston from Revere to the New Hampshire border.

The city of Lynn, the MBTA, and All Care’s workers will also benefit from the new move. While a nonprofit, All Care will pay the city $80,000 over the next five years in an agreement it reached in lieu of taxes.

The MBTA, which sold the lot to All Care for $925,000, has also agreed to a 30-year lease to provide as many as 200 parking spaces to VNA workers at its adjacent commuter rail garage.

All Care consolidated its two offices in Lynn and moved its Wakefield office to its new headquarters at 210 Market St.

For nearly two centuries, factories lined downtown Lynn. But over the last 50 years, the area has radically changed.

Little is manufactured there anymore, and fires ravaged old factories and former retailers, leaving large parcels empty in the 1980s and 1990s.

Now three of the downtown anchors sit at its entrance – All Care, North Shore Community College, and the MBTA station and garage. Also, hundreds of condos have been built in old factories in recent years, creating a residential presence in the city’s center.

This combination, which brings new businesses, condo owners, and existing mom-and-pop stores together, is the kind of infrastructure that James Marsh, the city’s community development director, has been hoping to see.

Marsh said All Care’s investment means more dollars will be spent in downtown Lynn in shops, restaurants, and other businesses. “To have those employees in the downtown is very important,’’ said Marsh.

Other nonprofits also have made significant investment in the edge of the downtown. Two years ago, Girls Inc. opened an $11 million clubhouse, and KIPP Academy is now building a new $28.5 million school.

While the new building has sweeping views of the harbor and the Boston skyline, it does not have an employee cafeteria, a key stipulation the city insisted on while negotiating with All Care.

Marsh and Walsh say that the lack of a cafeteria will mean a boost in revenue at local restaurants.

“It brings stability to the downtown and also brings an anchor point to that area,’’ said Walsh. “We now have hundreds of people who’ll have an opportunity to walk, shop, and dine in the Central Square area.’’